Forbe's Thought For the Day  listed some interesting facts which may delay the real recovery for the real estate market.  Probably the one i found the most interesting was that there are 79 million Millenials; people between the ages of 18 and 34.  75 million baby boomers fueled the real estate boom in the late 90's and early 2000's.  The Millenials should have families and be more apt to buy houses in the next 10 years.  This could really fuel a housing boom! Additionally,, with the continued uncertainty of the real estate market now, there are many boomers on the "bubble" where they do want to sell their homes to retire, but hesitate until they think they can get the best return on it.  So, it seems that we might have to wait a while for the real recovery of that market.  Additionally, a number of banks are holding off on placing foreclosures on the market until they feel they can recoup more of their investment.

We are getting calls from customers that put their moves on hold a year or two ago who have now sold their home.  Some of them had sold their home several times, but the deals fell through due to buyer not qualifying for a mortgage.

Guess we have to expect to hold on and wait for the real recovery.
Posted by Consumers Relocation Services at 11:03 AM 2 comments: 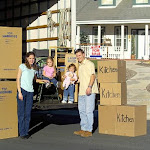